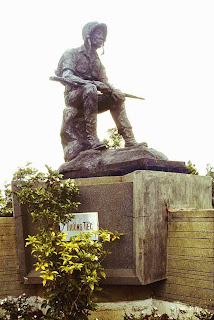 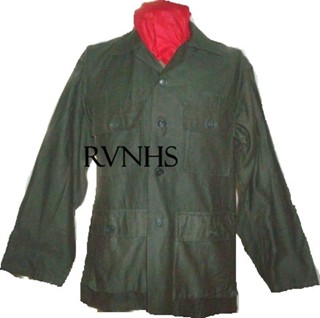 This shirt was one of the last uniforms to be issued and worn in the final weeks of the Republic of Vietnam. It has a March 1975 manufacture date, but has evidence of a name tape being removed form the chest, and also a unit insignia on the sleeve. It is not possible to tell the identity of the owner of this shirt, nor specific unit affiliation. What is clear is the shirt was issued and saw service some time on or after March of 1975, making it one of the last uniforms to be issued to the armed forces. The shirt is the olive drab four-pocket pattern, which come with covered or exposed buttons, and had become commonplace by 1975. 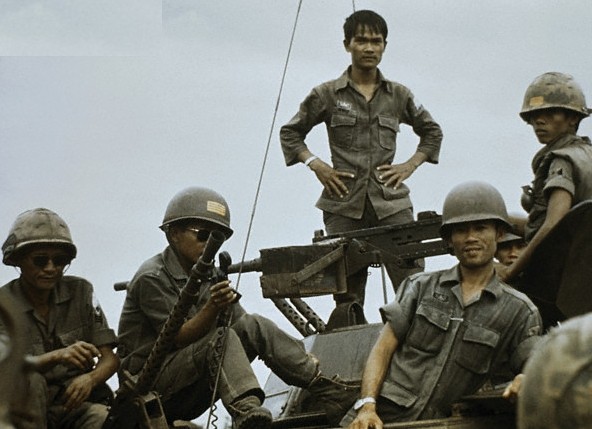 Armored crew in four-pocket pattern olive drab uniforms,
Battle of Xuan Loc, April 1975.
The shirt was acquired in the United States. Uniforms of those taken prisoner were typically destroyed. However, as part of the refugee asylum process after escaping Vietnam, soldiers were given civilian clothes to wear. If this was not possible, insignia was simply removed from their uniforms to signify their status as refugees. This may have been the case with this uniform, but we cannot be certain. Nevertheless, the shirt does represent one of the last Republic of Vietnam uniforms to see service in those intense final weeks.
Posted by RVNHS at 8:27 PM No comments: 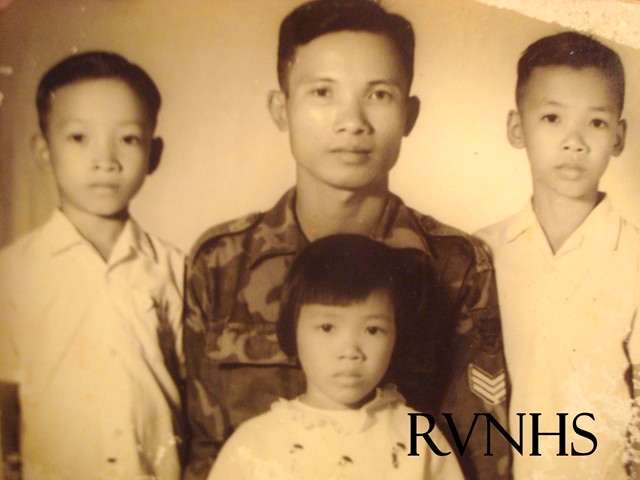 QLVNCH Ranger Senior Sergeant and Children, Saigon, April, 19, 1975, RVNHS Archive.
When we look back forty years ago this month we often try to envision the chaos and intensity of those last weeks of April. Of the many photos in the RVNHS Archive, this is one photograph that has always stood out. It shows a ranger senior sergeant with three children. On the reverse, there is a note which reads the children are his two sons and daughter, and that the photo was taken in Saigon on April 19, 1975. Unfortunately, the name of the soldier is not given. He is simply referred to as "father." The photo was acquired as a single photograph among many random images with no further accompanying information provided. We do not know what became of this soldier and his family in the coming weeks after this photo was taken. Yet, the photograph does stand in posterity as an image of a moment when as a world was ending, one soldier in uniform chose to pose for a portrait with his children.
Posted by RVNHS at 7:08 AM No comments: 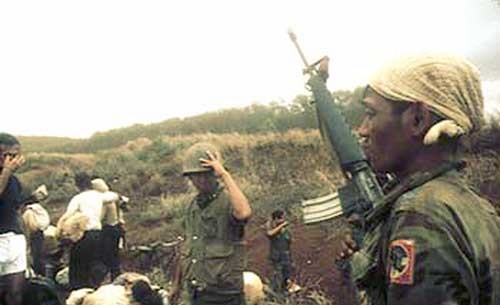 Airborne soldiers protecting refugees waiting to be evacuated, Xuan Loc, 1975.
During this month in 1975 the last major battle in the twenty year long struggle of the Republic of Vietnam was taking place. Much about the battle has been written and discussed by veterans, historians, news commentators, students, and authors of all kinds in the subsequent four decades. In this posting, RVNHS would like to ask you to take a moment to reflect upon the battle not as an abstract historical event, but as the fierce physical and psychological ordeal for the servicemen and women as well as the countless civilians of the Republic of Vietnam who were caught up in the intensity of those April weeks forty years ago.

Tank crew heading into Xuan Loc, 1975. Note the flags painted on the helmets
of two of the crewmen - a show of loyalty and determination undertaken unofficially
by soldiers during the battle.
The battle has often been discussed in terms of the last stand of the republic. Nearly all those soldiers who went into the forray to defend the republic`s cause would give their lives or lose their freedom this month. Of those who survived the battle many would spend years in "re-education" camps. The overall commander at Xuan Loc, General Le Minh Dao, would remain in capitivity until 1992, seventeen years after the battle ended. The sacrifice of these men and women in the eleventh hour of the republic stands testiment to the loyalty many held for the Republic of Vietnam. 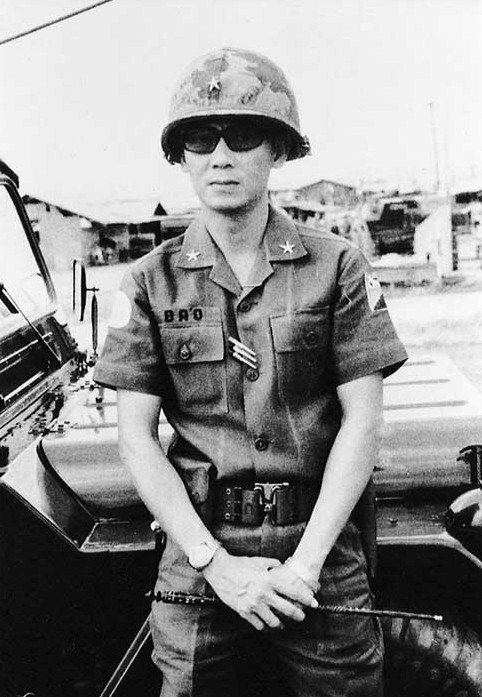 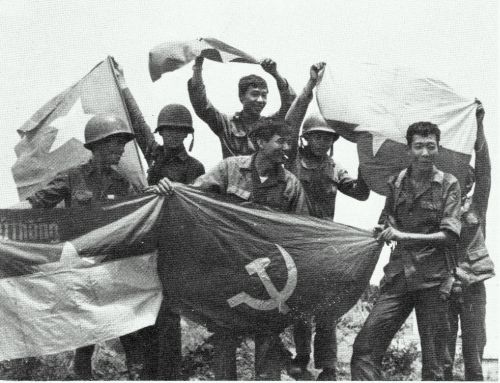 Much of the battle consisted of repeated repelling of assaults by Communist forces.
Here, republic soldiers pose with captured enemy flags, Xuan Loc, 1975. 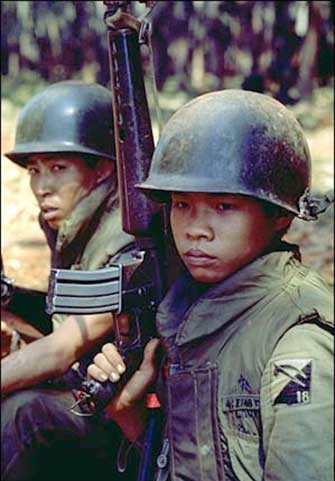 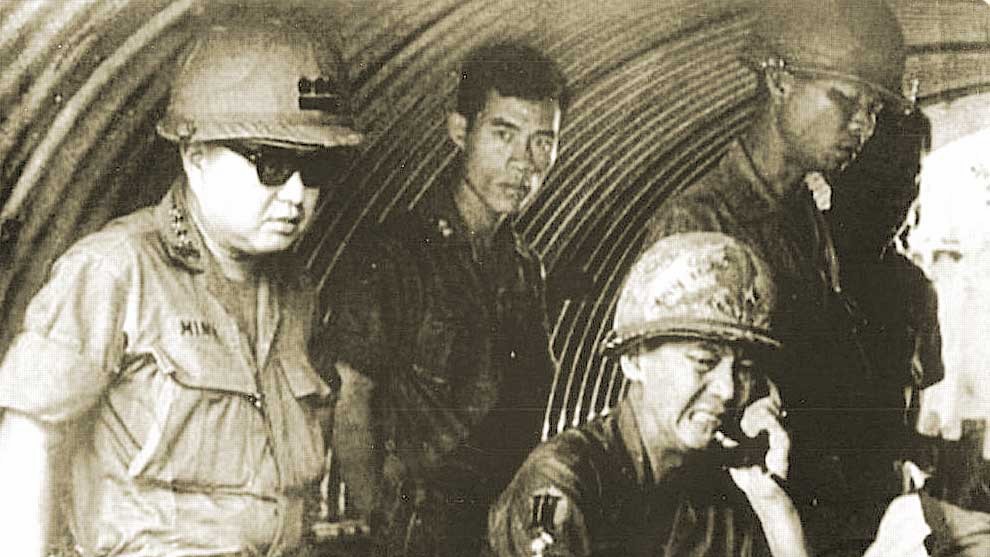 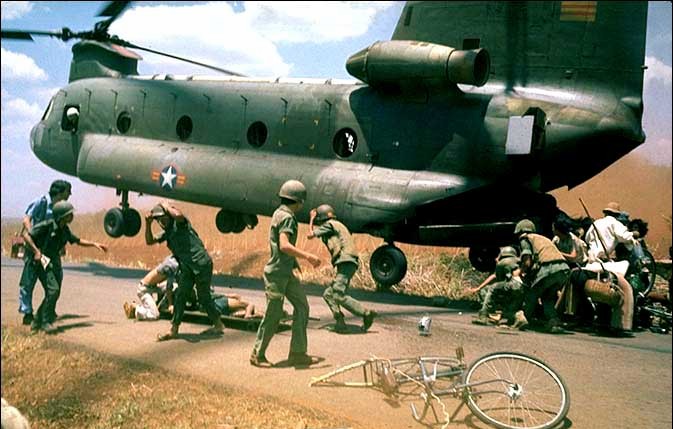 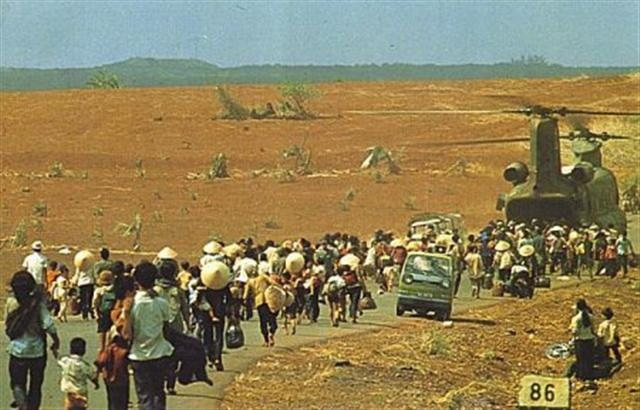 Refugees fleeing the Communist advance flocked around the military of the republic,
clogging roads and generally making military movement of any kind difficult.
Nevertheless, the republic`s military felt a responsibility to the civilians, and thousands were
evacuated aboard military aircraft from the conflict area as shown in this photo,
Xuan Loc, 1975.
Posted by RVNHS at 9:08 AM No comments:

Army of the Republic of Vietnam Ranks Table 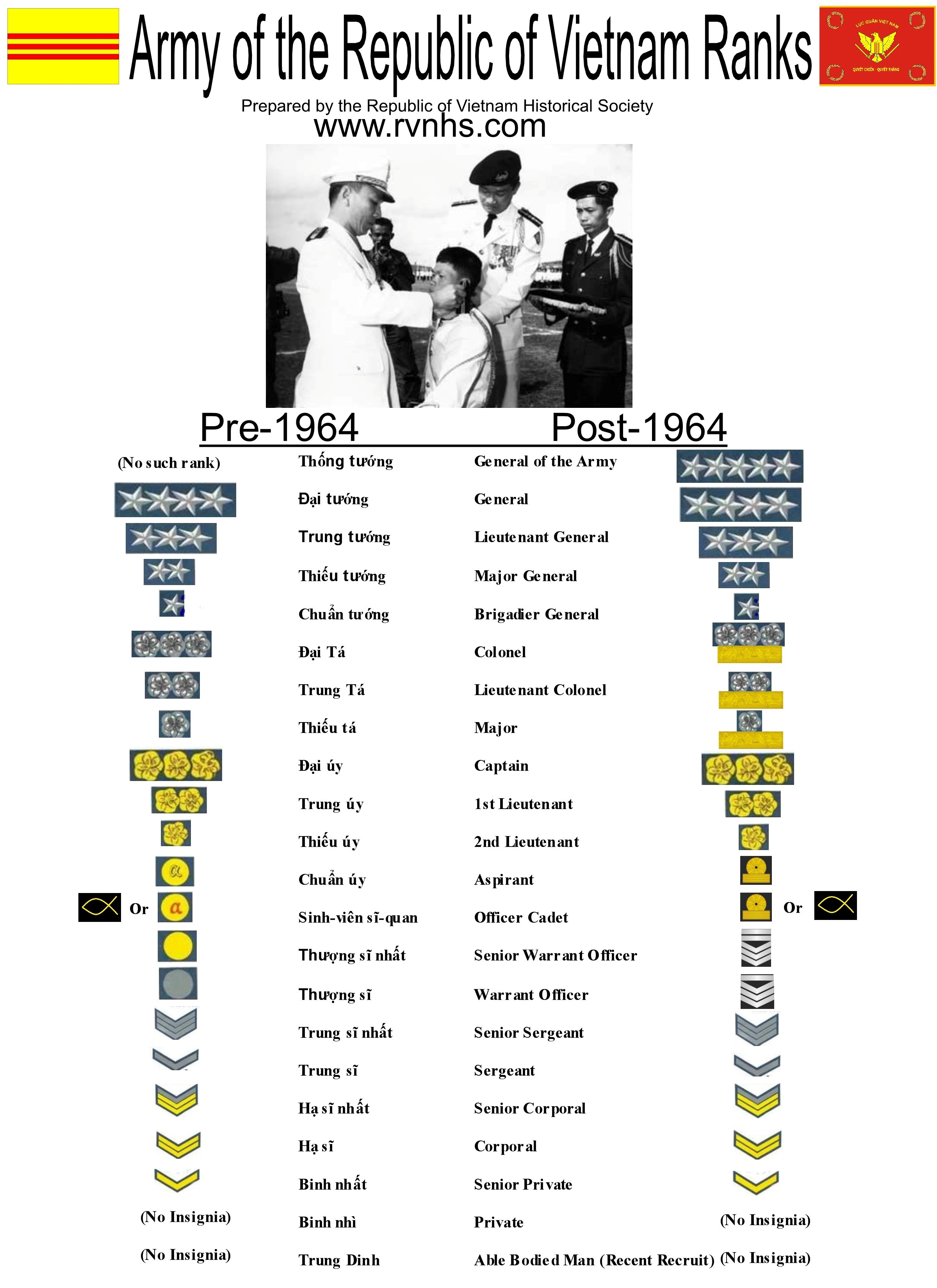 We often receive emails from individuals asking about Republic of Vietnam military ranks, i.e. what is a certain Vietnamese rank in English or vice-versa, or what would particular ranks look like. In response, we decided to put together this chart, which provides a basic overview for army ranks. To be clear, this only applies to the army, and not to the navy, air force, or marines. As the chart shows, there was a major revision of ranks in 1964. This change with regard to VNAF ranks was mentioned in a post by RVNHS in the past, which can be accessed here.
The major changes include the adding of a gold colored underbar for major to colonel ranks. This was done to reduce confusion as the color of a single blossom might not be discernable, which would make it impossible to tell if the individual was a major or a second lieutenant. The insignia for warrant officers was also revised, as was the addition of a new rank for a general of the army (five stars). Like all insignia used by the Republic of Vietnam, period photographs also show ranks in variations of material and manufacture methods, however the chart below does give an overview of the basic flow and appearance.
Posted by RVNHS at 2:12 AM No comments: 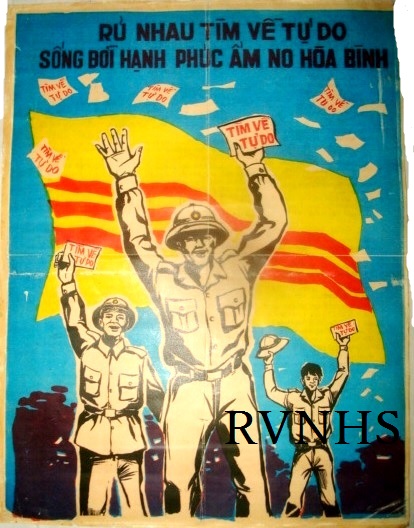 Communist soldier defection poster, 1960s, RVNHS Archive.
These two posters from the RVNHS Archive were produced by The Republic of Vietnam and targeted at Communist soldiers. The goal was to encourage their defection  by highlighting the hardships they were suffering in the field, and how their circumstances could be improved by switching to the republic`s side. Both posters highlight Communist soldiers surrendering with leaflets. Such posters would be placed in areas where Communist units were known to be active within Vietnam as well as in Cambodia and Laos. 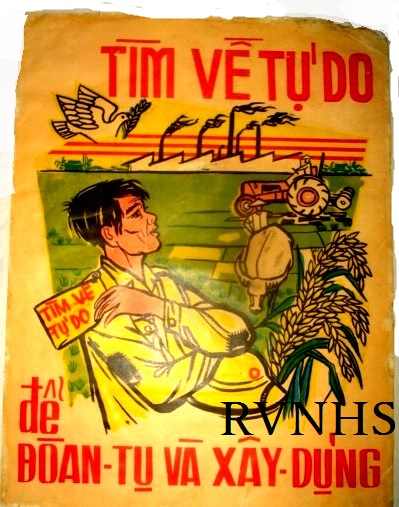 Communist soldier defection poster,
note the Chieu Hoi dove as well as factory and farm signifying the industrial progress of the republic, 1960s, RVNHS Archive.
Posted by RVNHS at 12:01 AM No comments: 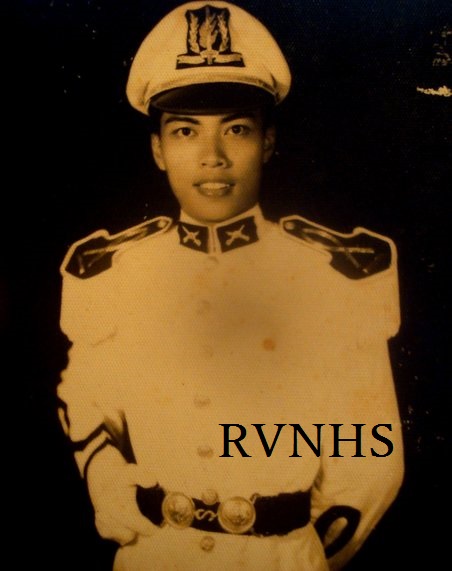 Officer cadet with double-buckle "S" shaped loop belt, 1967, RVNHS Archive.
Keeping with the topic of the recent acquisition by RVNHS of the officer cadet photographs, we wanted to make a brief posting on the topic of officer dress belts. There were two main patterns employed, which were a single buckle or double-buckle with "S" shaped loop. The buckles were gold colored while the belts were black. The single buckle belts had length loop adjusters on each side in gold colored metal (same as the buckle), while the double-buckle variant had only one adjuster in the same black color and material as the belt. Such belts were for the most part worn to accompany swords, and were used on ceremonial occasions. Included in this posting are original examples of each pattern of belt in the RVNHS Archive, and two additional portraits form the recent photographic acquisition, which show these two patterns in period use. 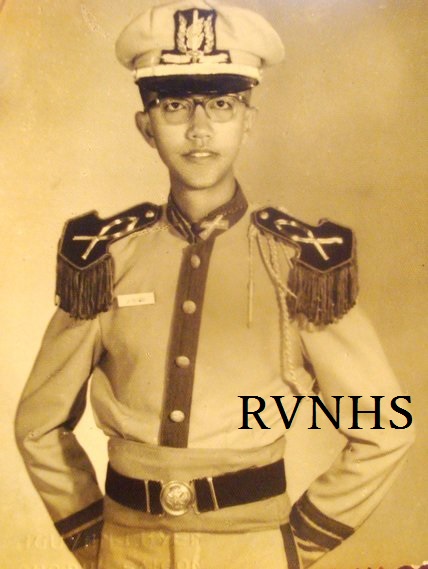