Star of the National Order of Vietnam 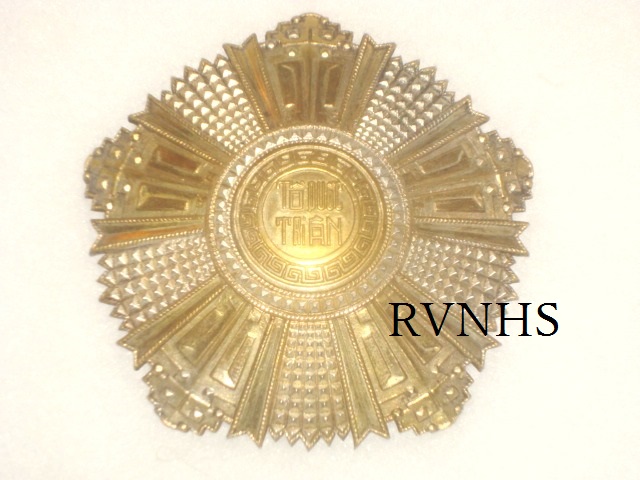 Star of the National Order of Vietnam,
RVNHS Collection.

The National Order of Vietnam ( Bảo quốc Huân chương ) was the highest award issued by The Republic of Vietnam. It could be awarded to either military personnel or civilians. The order came in five degrees. The two highest degrees (Grand Officer and Grand Cross) included the order on sash or ribbon, accompanied by the Star of the Order. The Star of the Order was worn on the right chest. Shown in this posting is a Star of the National Order of Vietnam from The RVNHS Collection. 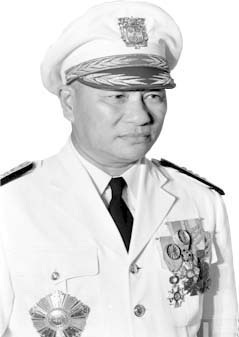 General Le Van Ty with Star of the National Order of Vietnam. 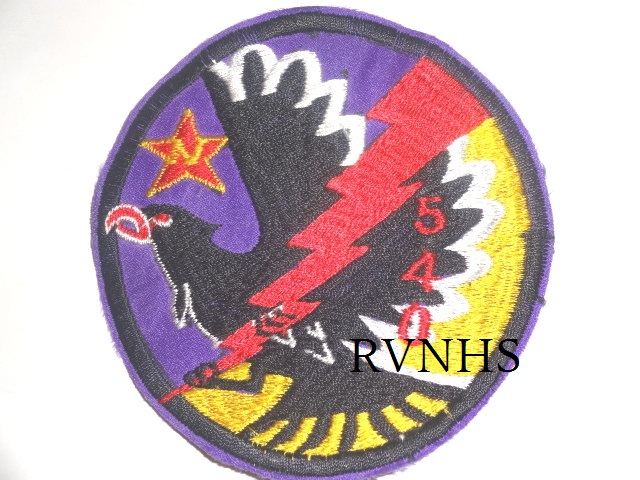 The VNAF (Vietnamese Air Force) 540th Squadron was based at Bien Hoa, and flew F-5A Freedom Fighter and F-5E Tiger II aircraft. Shown in this post is an original patch in The RVNHS Collection. The patch features a hawk with lightening bolt opposing a red star. As mentioned on the website, what is currently posted is only a fraction of the total collection, which is growing continually with new acquisitions. 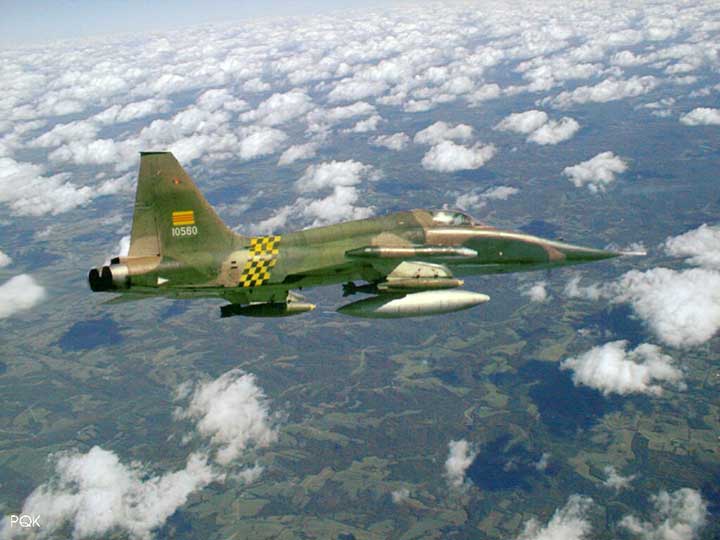 
Visiting a photographer`s studio for portraits in military uniform was as common a practice for soldiers of The Republic of Vietnam as those in any armed forces. Portraits marked special occasions, such as the completion of a training program, treasured leave at home with family and friends, or just as a souvenir of friendship between comrades in arms. A common practice in photographers` studios was the blending of the portrait into a military themed collage. The added material could take the form of drawings or paintings, as well as other photographic works. Included in this posting are two examples of military theme collage portraits from the RVNHS collection. 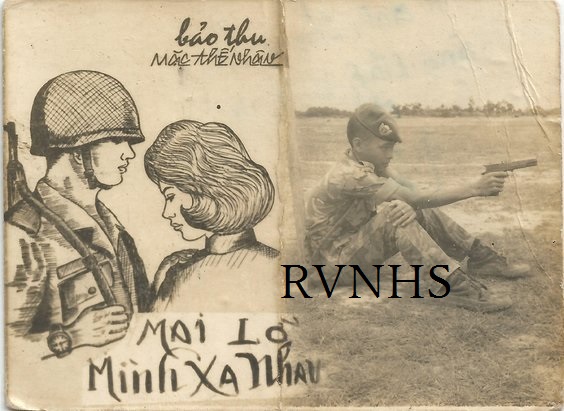 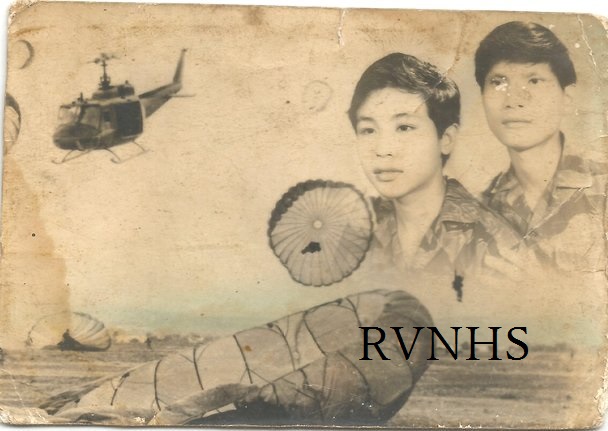 Two soldiers (in tiger stripe camouflage) pose beside
a juxtaposed image of a helicopter and airborne landing, ca, 1960s. Thủ Đức Military Academy epaulettes with one bar denoting
a cadet with over one year`s training.

The Thủ Đức Military Academy was located in the Saigon area, and was the alma mater of many officers of the Republic of Vietnam Armed Forces. A variety of programs were run by the academy, and the ties made between classmates during their training days can still be seen today in the active veterans` alumni associations. 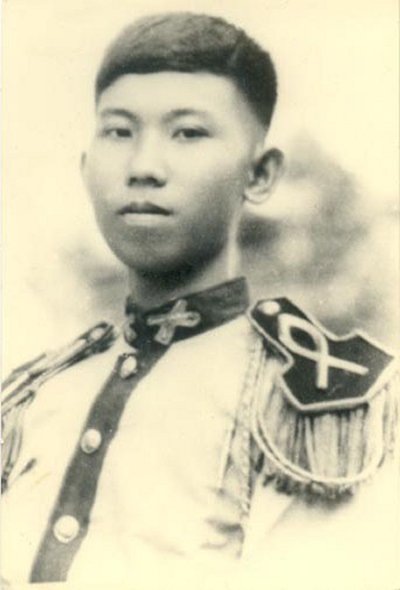 Pictured here from the RVNHS collection are a set of epaulettes from the academy, in the school`s colors (each military academy had its own color scheme for epaulettes). Time spent at the academy varied by the particular course of study, and the current needs of the armed forces. Horizontal bars on cadet epaulettes signified years spent in a particular program, with the absence of bars denoting less than a year.
Posted by RVNHS at 10:22 PM 1 comment: 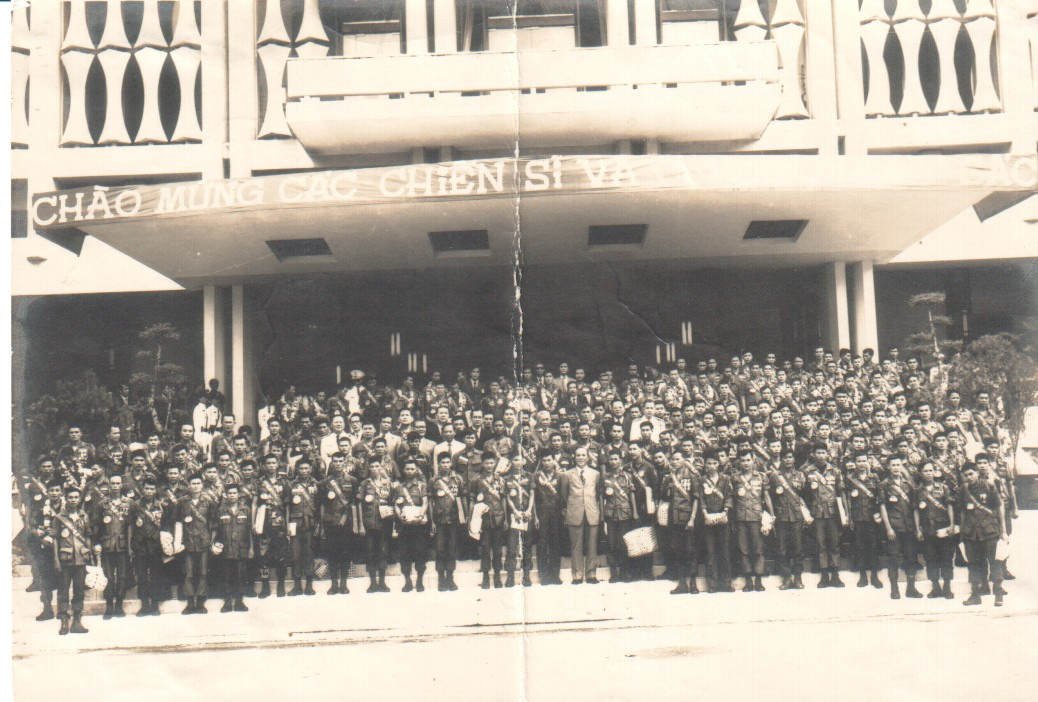 Recipients of the Chiến sĩ xuất sắc (Soldier Excellence Award)
posing with President Nguyen Van Thieu, Saigon, June 19, 1973.
The military of the Republic of Vietnam created and issued a plethora of insignia. These varied by material, manufacturing methods, as well as design. A complete record of every insignia that came into being will likely never be known. New pieces and design variations previously not well documented continually appear. In this post, RVNHS would like to highlight one of these “lesser known” insignia. Two recipients at the awards ceremony, Saigon, June 19, 1973.
The Chiến sĩ xuất sắc (Soldier Excellence Award) patch was created as part of a ceremony on the Republic of Vietnam Armed Forces Day, June 19th, in 1973. The ceremony was held in Saigon, and the award was issued to soldiers serving all regions of Vietnam from all branches of the armed forces. The soldiers were both officers and enlisted personnel who had been singled out in recognition of excellency by their respective commands. In total, oral history says roughly six hundred were given the award. First Lieutenant Nguyen Van Cu (left) at the awards ceremony, Saigon, June 19, 1973
Most of the recipients gathered in Saigon. Many of the soldiers came from field positions, and consequently had well-worn uniforms and non-regulation hair lengths. They were sent to a barber and then to a quartermaster to be fitted for new uniforms. Two new uniforms were to be given to each soldier. When they received the new uniforms prior to the ceremony, a special patch appeared on the right pocket. President Nguyen Van Thieu issuing the award to a recipient, Saigon, June 19, 1973.
The patch bore the phrase Chiến sĩ xuất sắc . “Xuất sắc ” can be translated as “excellent” with “chiến sĩ ” as “soldier.” It was circular and featured a soldier in full field gear with a raised M16. A red sash, worn over the right shoulder, was also given to each soldier. The ceremony was attended by Presidient Nguyen Van Thieu, most of the soldiers to be awarded, some of the soldiers` family members and acquiantances, various representatives of the armed forces branches, and media members to cover the event. 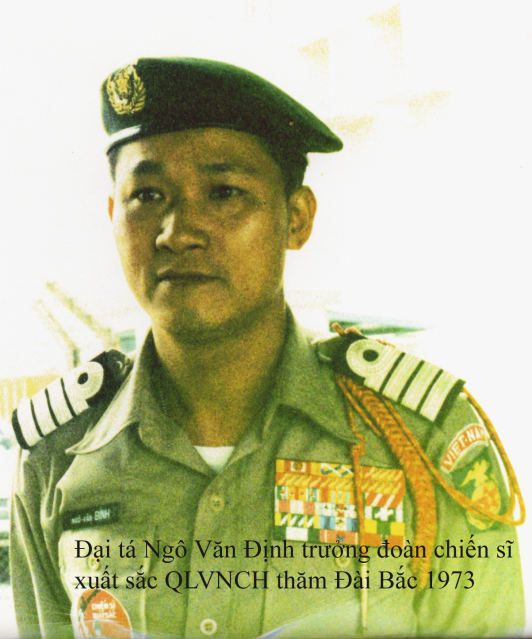 Marine Colonel Ngo Van Dinh wearing the award patch, 1973.
Considering roughly six hundred soldiers received the award and each soldier (in theory) received two uniforms with the patch, a rough estimate can be made that somewhere in the range of 1200+ of these patches were produced. Unfortunately, no examples of this patch are known to exist today. Being issued in such a limited number towards the end of the republic`s history, it is likely to assume nearly all of these patches did not survive post-1975 to be preserved. Nevertheless, visual and oral documentary evidence exists to show the insignia`s design, and can thus be included in the lengthy history of insignia employed by the republic. 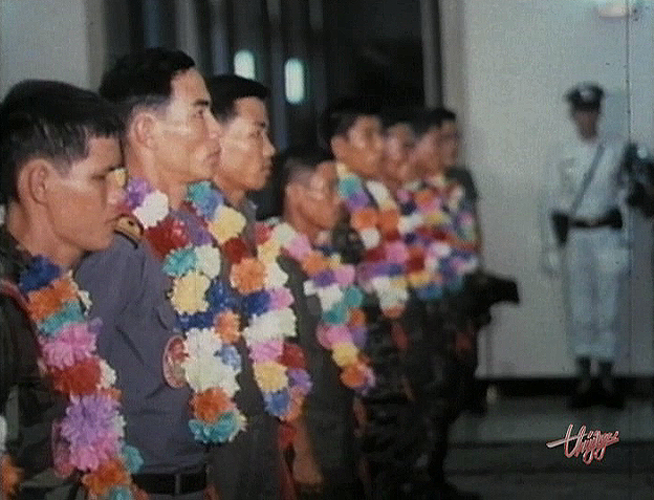 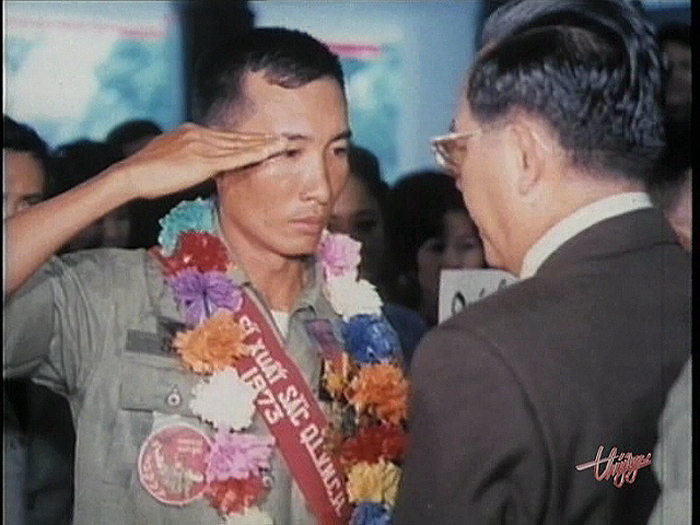 
From the RVNHS Archive, a rare photo of the Airborne Division (Binh chủng Nhảy Dù) band and honor guard just prior to a ceremony. Note the division flag at right, and the Women`s Armed Forces Corps (WAFC) member at left. 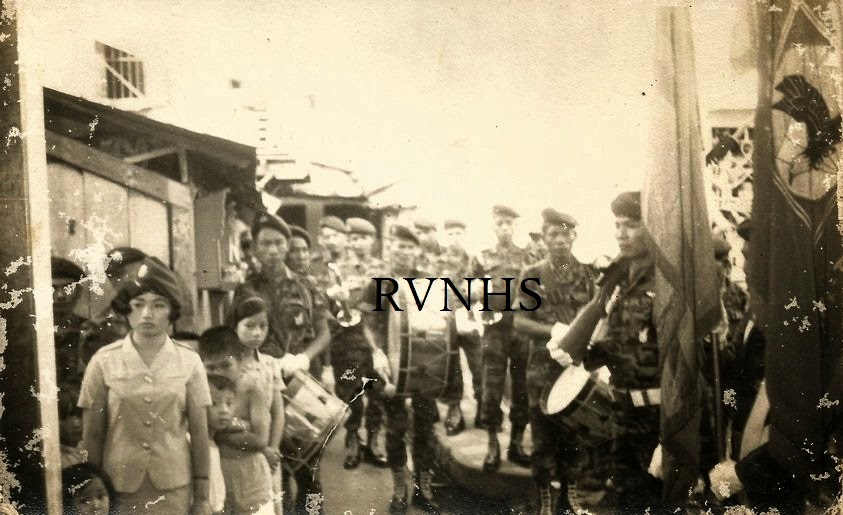 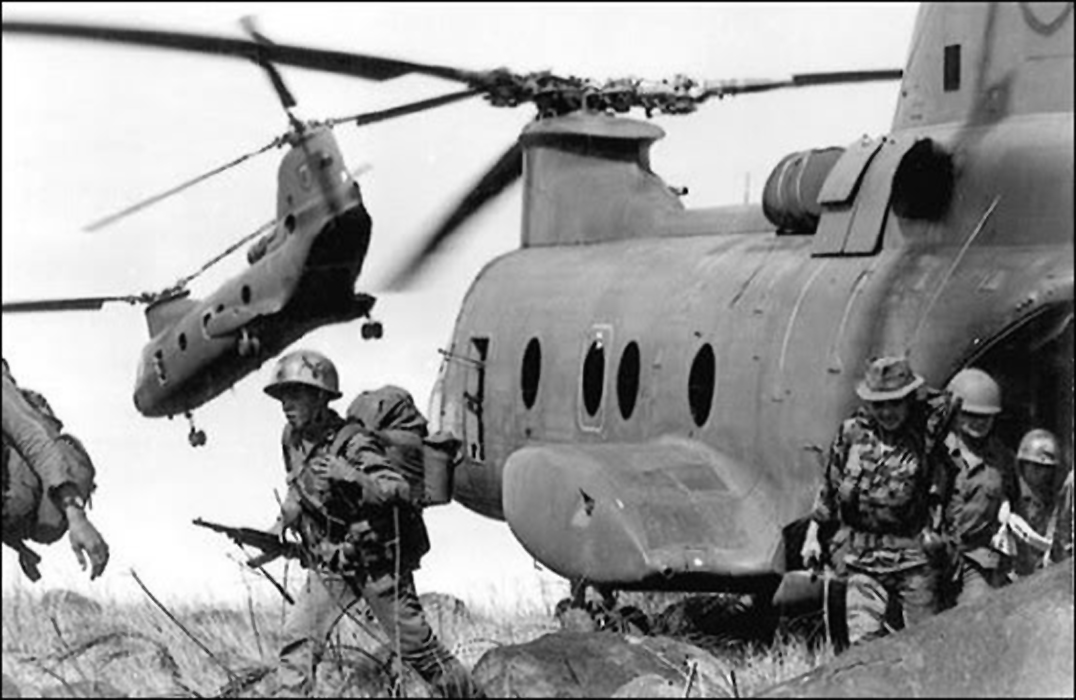 Forty-four years ago this month, the military of the Republic of Vietnam was involved in Operation Lam Son 719 (Chiến dịch Lam Sơn 719) in Laos, February 8th - March 25th, 1971.
Communist forces had long established supply and transportation networks running through the territory of Laos in what is commonly referred to as the Ho Chi Minh Trail. The objective of the republic`s military campaign in Laos was to disrupt this network, and in turn diminish the Communists` abilities to launch offensive operations into the republic`s territory. It was the largest single deployment of the republic`s troops outside its borders, and was the largest helicopter operation of the Vietnam War. 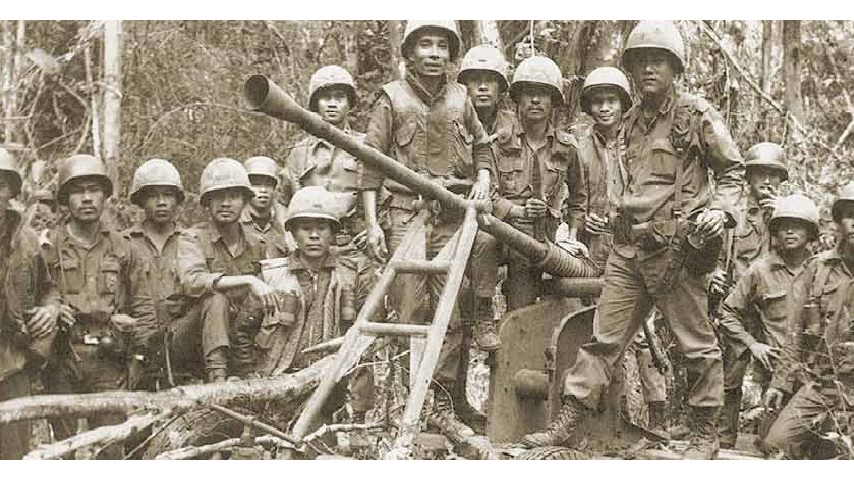 Following this campaign, and other operations in Cambodia, the Republic of Vietnam instituted a new decoration. The Medal for Campaigns Outside the Frontier was created in 1973. It was the last new military medal to be established by the republic. It was awarded to soldiers who had served in Laos and Cambodia, with country devices signifying to which area the individual served. The "Ha-Lao" (Laos) device was only given to veterans of Lam Son 719, as it was the only officially recognized operation in Laos undertaken by the republic. 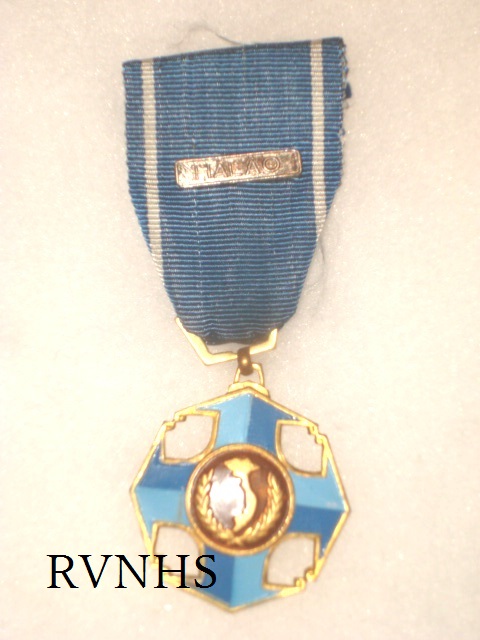 Medal for Campaigns Outside the Frontier with "Ha-Lao" device,
RVNHS Collection.

We recently started a page on Facebook. This blog will continue to be updated regularly, but we will also be posting updates on the Facebook page. You can view our page by clicking on the link below. If you`re a Facebook user, please feel free to "like" our page, and post any comments or questions you might have. Thank you!