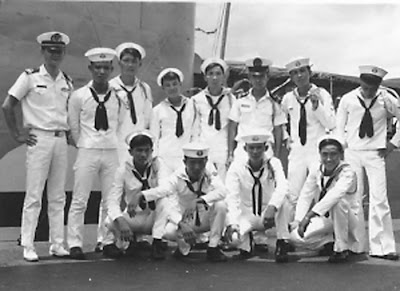 Republic of Vietnam naval personnel,
note ratings worn on the left sleeves on some of the sailors, 1960s-70s.
As with many navies around the world, sailors of the Republic of Vietnam were given specific ratings to denote their areas of specialization and training. These ratings were worn by enlisted ranks on the left sleeve. The ratings ranged from such fields as gunnery and torpedo specializations to sonar and medical designations. Photographic evidence from the period shows that although sailors may have particular ratings at a given time, the actual rating insignia was not always worn. 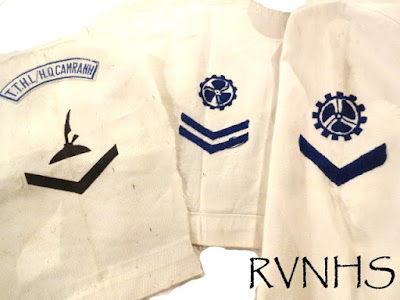 Examples of three ratings as they appear on Republic of Vietnam sailor jumpers.
Left: a clerk, 3rd class. Center: an engineer, 2nd class. Right: an engineer 3rd class.
1960s-70s, RVNHS Archive.
The ratings would appear on the upper left sleeve, and for petty officers would be accompanied by chevrons denoting the class of the rating, i.e. one stripe for third, two for second, and three for first class. Ratings appeared in black or blue colors. It is suggested the black denoted land based assignments while the blue was for those serving on vessels. Ratings could be worn not only on the white jumpers worn by sailors, but other fatigue uniforms as well. 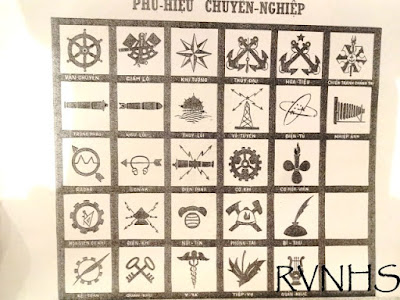 Chart showing some (but not all) of the ratings in use by the Republic of Vietnam Navy, 1969, RVNHS Archive. 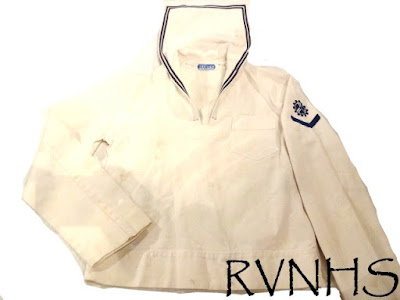