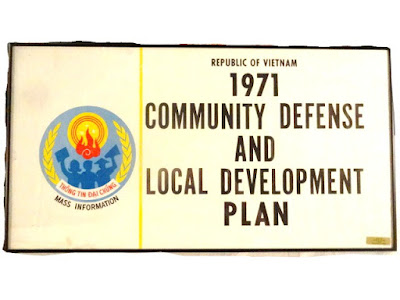 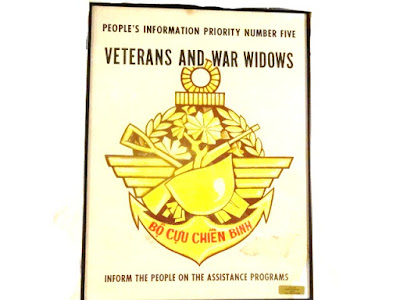 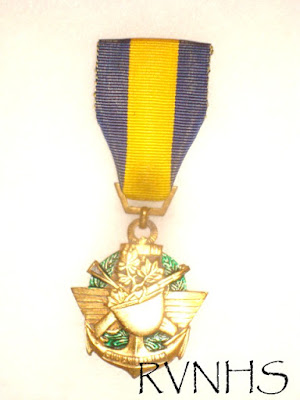 Republic of Vietnam Veterans medal, 1967-1975, RVNHS Archive.
The Republic of Vietnam Veterans and War Widows Assistance Programs were a collection of different agencies and charities dedicated to the welfare of former soldiers and the widows and orphans of the fallen. Many of the organizations that aided these individuals were non-governmental bodies, such as religious groups or Red Cross societies, but the Republic of Vietnam military also provided aid in addition to serving as the conduit for that delivered from outside organizations. On September 1, 1967, a medal was comissioned in two classes to be awarded to those individuals who undertook exceptional effort to provide aid to veterans and the families of fallen servicemen and women. The emblem of the medal - a helmet with anchor, wings, crossed rifle and shovel, and laurels - became the symbol for the assistance programs. 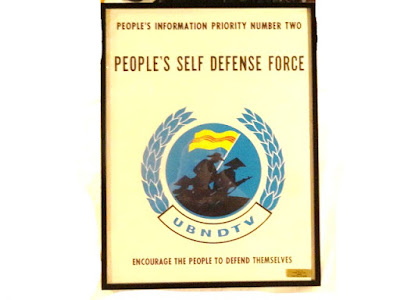 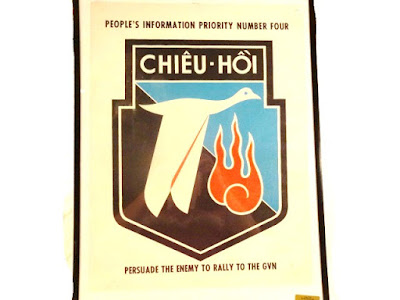 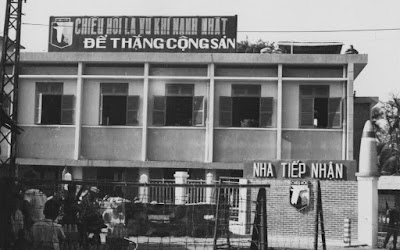 The Chiêu Hồi Program was a campaign started by The Republic of Vietnam to encourage defections from Communist operatives to the side of the republic. It began on a small scale in the early years of the republic, but became a major program by the late 1960s. It was staffed by Republic of Vietnam military personnel assigned to the program, as well as civilian staff and volunteers. The campaign consisted of leaflets, posters, and other material encouraging defection being distributed in areas of enemy activity. Those enemy personnel who took up the offer were then taken to centers where they were gradually integrated into the republic. Many defectors chose to serve in the ranks of the military of The Republic of Vietnam while others took on roles of intelligence operatives for the republic, or returned to civilian life. In total, upwards of 100,000 enemy personnel defected to the republic through the program. 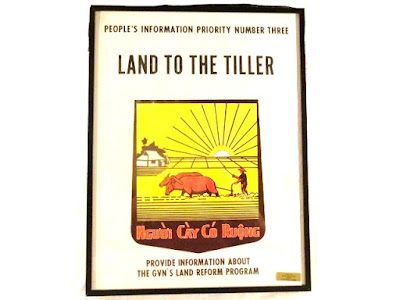 Land to the Tiller Program poster, 1970s,
Museum of History of the Republic of Vietnam Armed Forces.
The "Land to the Tiller" campaign was a land reform program instituted by Republic of Vietnam President Nguyễn Văn Thiệu on Farmer's Day, March 26, 1970. The program aimed to allow larger numbers of rural agricultural workers to own their own land. Under the program, individual land ownership (in most instances) was limited to no more than fifteen hectares. Large landowners who relinquished ownership of tracks of land were compensated, and the new parcel owners were given assistance for developing farms. The primary goal of the program was two-fold. It was hoped to both raise the quality of life for landless agricultural workers and lead to greater agricultural output (many of the lands given to the farmers were idle without being used for agricultural work, thus the name of the program "land to the tiller.") With the end of the republic in 1975, the lands given to the agricultural workers were nearly all confiscated by the Communist authorities.