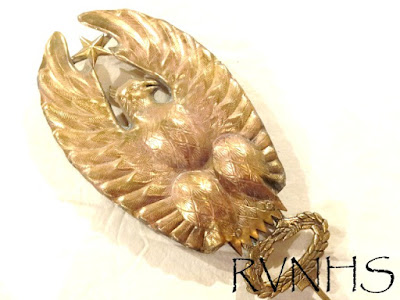 Republic of Vietnam Military Flag Finial, 1960s-70s, RVNHS Archive.
The flag finial shown in this post is an original pre-1975 piece for a Republic of Vietnam military flag. Typically, a color guard would carry two flags - the national colors and the flag of the particular unit. The finial for the national colors consisted of a spike-design. The finial for unit and other military flags was of the pattern shown here, featuring an eagle atop a wreath with a star held overhead between the wings. 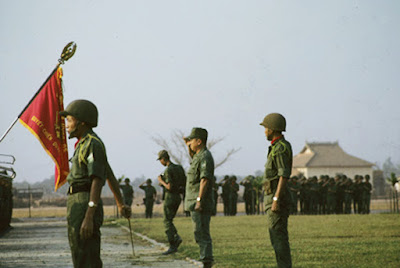 General Thuan Quac Pham as 5th Division commander saluting the colors during the playing of the Republic of Vietnam national anthem.
Note the design of the finial atop the army branch flag.
The practice of having separate designs of finial for military versus the national colors was for the most adhered to, but exemptions to the practice occured. First, period photographs seem to show the military design finial did not become widespread until the mid-1960s. Many early photos simply show the spike design on both types of flags, which would later be regulated for the national colors only. Addtionally, in the early years of the republic, many military unit flags featured the national colors with the unit designation embroidered onto it. Photographic evidence shows both the eagle and spike-design in use with these flags, even in later years. Nevertheless, most use of flags by military units, especially after the mid-1960s, followed the policy of using separate finial designs for each type of flag. 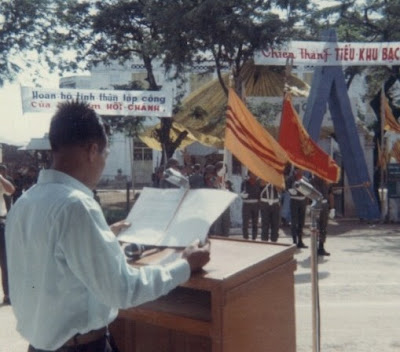 A Republic of Vietnam military color guard stands at attention during a speech. Note the different finials for the national versus military flag, 1960s. 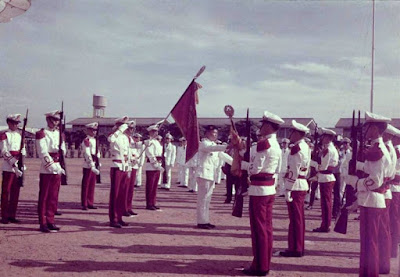 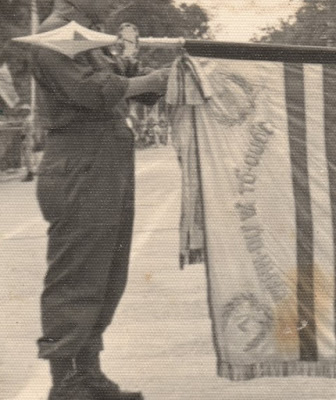 A photo showing detail of an early 7th Infantry Division flag. Note the flag is of national colors base with the unit designation embroidered onto it as was the common pattern for most early military unit flags. Also, note the use of a spike finial.