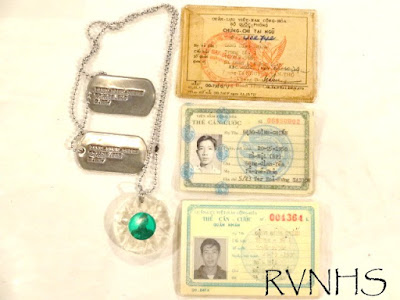 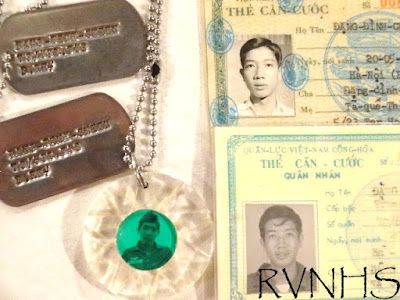 Vietnam Air Force crewman's personal effects: details of photos as they appear on the identification cards and locket, 1960s-70s, RVNHS Archive.
The identification cards show him last serving with the 4th Air Division, which was based at Binh Thuy Airbase near the city of Can Tho. The division oversaw the 74th and 84th Tactical Wings. The airman was a sergeant, and he wears a pair of flight wings, signifying him as likely the member of an air crew - although it is not certain to which unit he belonged specifically. Along with his two dog tags on the chain is a personal locket. On one side it features his photo. On the reverese, the image of an unknown woman. It is not known what relationship existed between the two, but it is certain they were close.

Vietnam Air Force crewman's personal effects: details of opposite sides of locket, 1970s,
RVNHS Archive.
This small grouping of items offer a glimpse into the personal identity of one member of the republic's armed forces in its final months. These items were kept together as a reflection of that identity for posterity into the present. This post is hoped to highlight such individual memories, and encourage others to ensure their preservation for future generations.
Posted by RVNHS at 12:33 AM