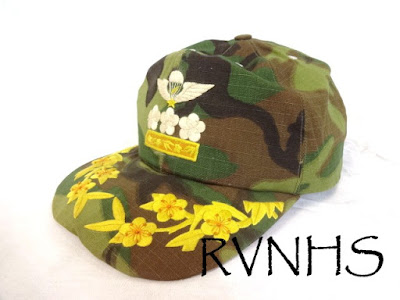 Republic of Vietnam Airborne Colonel Camouflage Cap,
ca. 1960s-70s, RVNHS Archive.
This camouflage cap was recently acquired by RVNHS, and is currently on display at the Museum of History of the Republic of Vietnam Armed Forces in Westminster, California. This rare piece of headgear was worn by a full colonel of the Republic of Vietnam airborne. The cap is comprised of a mixture of Vietnamese camouflage patterns, and bears colored embroidered insignia. The embroidery consists of blossoms signifying a field officer rank along with the insignia for full colonel and master jump wings. The cap was made by a tailor in Saigon. 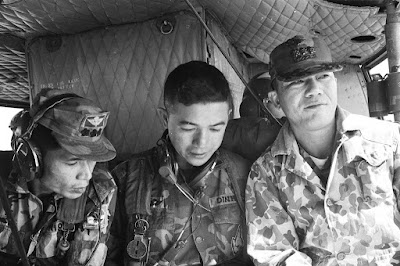 Republic of Vietnam Airborne Colonel Luong Quang Le (far right)
in camouflage "baseball style" cap with metal colonel rank and jump wings accompanied by subdued blossom wreaths on the brim. Note the crown-pointed camouflage cap with rank and wings worn by the captain at far left.
Caps of this type are sometimes referred to as "baseball caps" due to the pattering of cut. Crown-pointed field caps were also worn. Period photographs show that both types were in use by members of any branch of the armed forces. Airborne personnel can be seen wearing both types of caps in a variety of camouflage patterns or olive drab. It was common for members of the airborne, especially officers, to have jump wings and/or rank worn on these caps. The insignia could be either colored or subdued as well as take form of embroidery, sewn on cloth or silk, or affixed metal insignia. 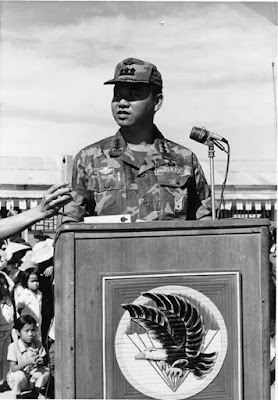