Battle of An Lộc Poster 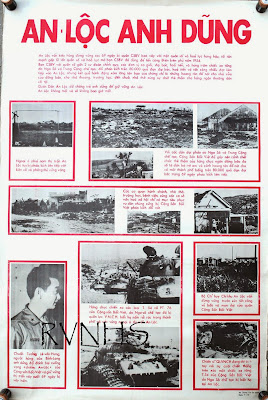 Republic of Vietnam Military Poster, Battle of An Lộc, July 7, 1972, RVNHS Archive.
The Battle of An Lộc lasted for sixty-six days, and saw the Republic of Vietnam gain a great victory over the Communist forces. Before the battle ended, the republic was already promoting the gains of the military against the Communists in newspapers, magazines, radio, television, and other information outlets. This original poster acquired by RVNHS was produced on July 7, 1972, as the battle was still ongoing. It was designed to inform the populace about the battle, and encourage support to continue the struggle towards final victory. The poster highlights the battle with images of fighting, destroyed enemy tanks, and one of the key military figures at the battle, General Lê Văn Hưng. Today, General Hưng is often remembered as one of the fallen of Black April in 1975, when he and other leading Republic of Vietnam officers committed suicide rather than surrender to the invading Communists.
Posted by RVNHS at 9:15 PM