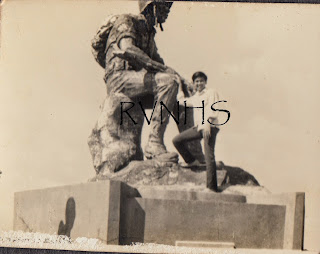 Photograph of Thuong Tiec, 1960s, RVNHS Archive.
From the RVNHS Archive, a rare original photograph of the Thuong Tiec (Mourning Soldier) statue, which stood at the entrance to the Republic of Vietnam National Military Cemetery in Bien Hoa. The statue was destroyed in 1975 by the Communist Vietnamese army, but has remained a potent symbol for the sacrifice of those who struggled for the cause of the Republic of Vietnam. A silhouette of Thuong Tiec is also the symbol used by RVNHS.
Posted by RVNHS at 11:24 PM