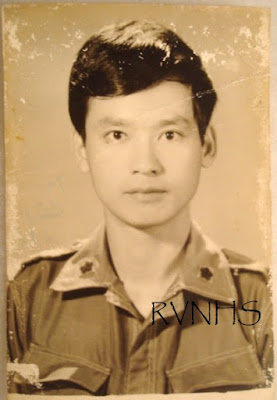 Second Lieutenant Đào Hồng Phát, 1970s, RVNHS Archive.
Đào Hồng Phát was a second lieutenant in the Republic of Vietnam Armed Forces. He was born on December 17, 1947, and killed in action on June 1, 1974. He was twenty-six years old at the time of his death. This photograph has been in the RVNHS Archive for some years. It is believed to have been a portrait used during Đào Hồng Phát's funeral. Other documents accompanying the photo include condolence letters from friends and fellow soldiers to his family. However, unfortunately, none of these documents provides information about his particular unit nor the circumstances or location of his death. He is simply described with sorrow as having fallen on the battlefield. If anyone reading this post has information about Đào Hồng Phát, we would be interested to know more. Today, it has been forty-one years since this soldier's death, and in honor of the Republic of Vietnam Armed Forces Day (June 19th), we wanted to reflect on the many soldiers, like Đào Hồng Phát, who gave the ultimate sacrifice for the Republic of Vietnam.
Posted by RVNHS at 11:00 PM